My research themes have three different focus areas. 1) Surface and Sub-surface Hydrologic systems, 2) Digital Rock Physics and pore-scale fluid dynamics, and 3) Geopressures and Basinal fluids. Listed below are some examples of research done in past

A) Late Quaternary Aquifer salinization in the Murray basin, Australia

This research showed how quaternary paleoclimate oscillations from humid to dry regimes can lead to salt accumulation in the lake-bed of several lakes in the Murray basin, Australia. During a subsequent humid/wet climates the brine reflux from such lake-bed advect to shallow and deep zones and contribute to aquifer salinization.  This study provided growing evidence about the role of lake-groundwater hydrodynamics and paleoclimatic forcing on aquifer salinization as opposed to other postulated models such as basinal brine flux and salt/halite dissolution.
​

Nebraska Sandhills lakes can be flow-through, net-gaining, net-loosing, or exhibit a mix of these conditions, which results in dramatic salinity differences within the lakes and the shallow subsurface. Sensitivity study showed that seasonal weather forcing contribute to a lake transforming from a net-gaining to a net-loosing fluxes, and seasonal pumping of solutes/salts from lakes to aquifer
Coupled lake-groundwater pressure head changes due to evaporative loss in lakes
Solute/salt pumping from lake-bed to aquifer as a result of seasonal weather forcing

High resolution thermal profiling  from basin-wide groundwater wells showed thermal anomalies deviating from geothermal gradient. We found that high thermal anomalies in shallow aquifers were associated with neighboring faults and a result of upward fluid flux through faults from deeper zones. The upward fluid flux was a result of pressure potential caused by the groundwater withdrawal from large-scale mining operations in the basin. The localized thermal anomaly in vertical section indicated both the conduit and barrier behavior of faults which was dependent on the juxtaposition of type of sedimentary layers across the faults.

In North Slope, Alaska, permafrost can be up to 500-600 m thick, which is mostly controlled by the basal heat flux in the region and the surface thermal regime. At ConocoPhillips, I investigated the controls on regional distribution of permafrost thickness in the North Slope region. I built Multiphysics simulation models, which involved solving the energy balance and water-ice phase change equations. The model included detailed morphology of hundreds of surface lakes as surface boundary condition and subsurface basin architecture with diverse material properties. I found that the size of lakes is critical in controlling the depth of thawed bulge around them. These lakes also migrate over time and will be centers of increased thawed regions under global temperature increase. Permafrost thickness is difficult to measure around these lakes, and the rates at which these thawed bulges will grow and how they will interact with other thawed bulges with gradual temperature increase needs to be further studied.

​At ConocoPhillips, I carried out computational fluid dynamics (CFD) simulations on domains obtained via digital rock analysis of nano-porous media. I used the coupling of Navier-Stokes equations and porous media with Brinkman’s equation for pore-network topology and organic matter, respectively. The simulation provided effective media properties like permeability as an upscaled property and established the relative controls of dual porosity media on bulk flow behavior. Likewise, simulations were set-up for a domain of fractured core plug to compute the bulk permeability behavior of such a dual porosity system. The data was combined with experimental results as a validation for next stage of upscaling.

B. Pore geometry controls on Darcy's Law and Forchheimer Law

​During my PhD, I extensively studied pore-scale fluid physics to determine the role and controls of pore geometries in modifying the flow behavior. The motivation was to outline the limitations of Karman-Kozeny equation and circular tube assumption in pore-network models. In using more realistic diverging-converging pore geometries, I studied the role of eddies, boundary stresses in the laminar flow field which manifested as the Darcy’s law. In studying the role of eddies with increasing inertia, i.e., Reynolds number, Re >>1, I was able to describe the physical mechanism behind the failure of Darcy’s law or the non-Darcy behavior. For long non-darcy behavior was attributed to onset of turbulence, however, I showed that the growth of eddies with occurs due to an increase in intertia in the laminar flow regime manifests as the non-Darcy behavior or the Forcheimer law. I resolved the boundary stress on the pore walls to show that it the stress offered near pore throats that controls majority of resistance or friction drag which is manifested as permeability of the media. Clearly, a pore geometry with smaller pore throat will have higher permeability, and vice versa.  Later, I quantified pore geometries with a dimensionless hydraulic shape factor β and found there exists a power law between the permeability and β with an exponent of 3/2.

​During my PhD, I designed drainage-imbibition experiments to study the controls of grain geometry and wettability on capillary trapping of sc-CO2. I used X-ray µ-CT imaging to examine mechanisms of two-phase fluid transport and their distribution characteristics. This research showed that CO2-wet media will critically limit capillary trapping of sc-CO2 and the drainage-imbibition in water-wet media occur more like in finger-type pattern, unlike the piston type displacement which was found in the CO2-wet media.

​I developed a new method to measure the wettability (contact angle) of minerals and rocks at reservoir condition fluids. This method use X-ray µ-CT imaging of fluid pair and minerals-rocks in capillary or slot form. This research showed how the salinity of brine can alter the wettability towards less water-wet characteristics.

​Micromodel devices in combination of optical microscopic imaging offer dynamic visualization technique to investigate controls and mechanisms of multiphase transport phenomenon, however, in two dimensions. As a visiting scientist in the Department of Physics, University of Bergen, Norway, I studied the role of fractures on the mechanisms of oil displacement due to CO2-foam flood using the quartz micromodel chips etched with sandstone topology. This research was instrumental in documenting the dynamic pore-scale phenomenas like snap-off at the pore throats, and multi-pore ganglion break-up and coalescence. CO2-foam flood was found to be an effective method to displace oil, albeit the displacement started in finger-type pattern and only increasing the sweep efficiency with increasing number of imbibed pore volumes. 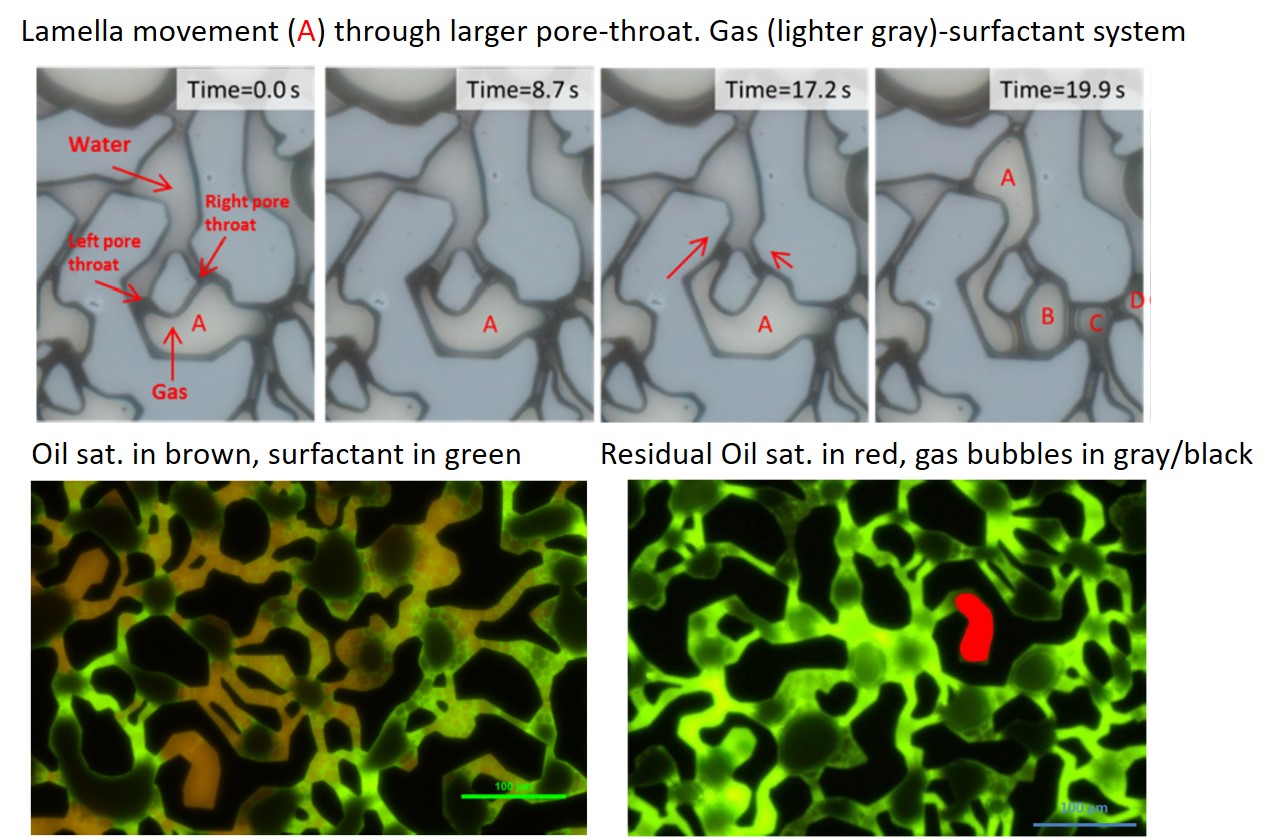 ​Pore pressure evaluation is critical to geohazard mitigation by ensuring safety and security of, for example, storage of anthropogenic wastes like salt water disposal and CO2 sequestration, sustainable withdrawal of groundwater for agriculture, energy generation, and hydraulic fracking and recovery, Oil & Gas drilling operations in overpresssured zones. Pore pressure evaluations are generally done by measurements of groundwater head or using down hole pressure gauges. These methods are effective in high permeability reservoirs, and likewise, pressure prediction methods which uses simplified geomechanics and pressure equation with the gravity term also stand effective in forecasting pressures across basins for single phase fluids. Challenges in pressure evaluation arises due to tectonic activity in basins such as salt tectonics, complex basin geohistories like uplift and erosion, multiphase miscible fluids thermodynamics, especially for complex fluid composition like hydrocarbons, which is further complicated by variability in geothermal gradients. The pressure measurement and prediction methods become further challenging in unconventional reservoirs or the ultra-tight formations like shales, siltstones, and source rocks. Both a good pressure measurement technique or a simulation method in unconventional reservoirs do not exist.

​To test the controls of fluid thermodynamics and media geomechanics (expansion during uplift and erosion) on pressure evolution, I wrote a MATLAB code which solve the coupled equations, and showed that fluid composition can have very large control on pore pressure, for example, a basin burial of 2 Km can lead to pressure build-up of greater than the lithostatic gradient or an uplift of 2 Km can cause pressure drop below the hydrostatic gradient. 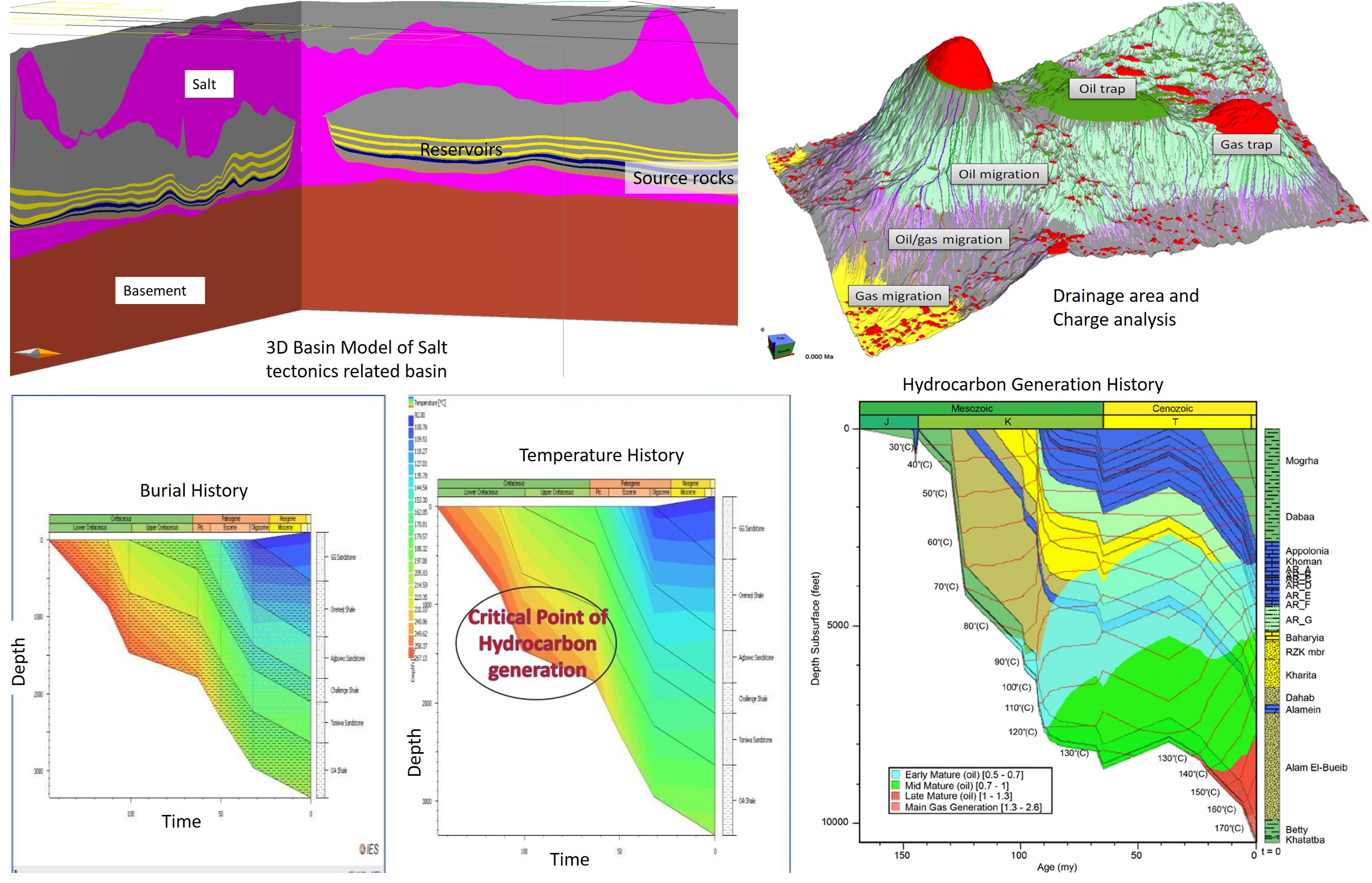 ​Seismic data analysis requires velocity prediction which is dependent on density and elastic moduli of subsurface rocks. Porous media density is a function mineral density, porosity, and fluid composition. Evaluation of porosity and elastic moduli are a challenging task in tectonically active basins especially with over-pressured zones. The over-pressured zones and the related effective stress-porosity couplings can be predicted using basin modeling methods with reasonable accuracy. Likewise, poro-elastic modeling is helpful in simulating geomechanical stress state related to the compaction and decompaction due to fluid withdrawal and fluid injection, respectively. The poro-elastic modeling is of particular interest for 4D seismic data analysis. At ConocoPhillips, I simulated overpressured zones in salt tectonics controlled basin settings of Gulf of Mexico and predicted porosity distribution for seismic velocity prediction. This technology application resulted in significant improvement of seismic image quality and influenced business decisions. I build poro-elastic models to predict the stress state of reservoirs related to hydrocarbon withdrawal which would predict changes in seismic velocity related to compacting/deforming reservoirs.
In permafrost regions, the seismic velocity varies up to two times between the frozen and thawed aquifer zones. An accurate prediction of permafrost distribution, especially around lakes, is of importance for a good seismic velocity prediction. At ConocoPhillips, I built Multiphysics models to simulate permafrost distribution around hundreds of lakes in North Slope, Alaska. The physics based permafrost modeling allowed improved seismic velocity prediction over the conventionally interpolation methods which missed on accurate depiction of permafrost geometries especially around lakes. 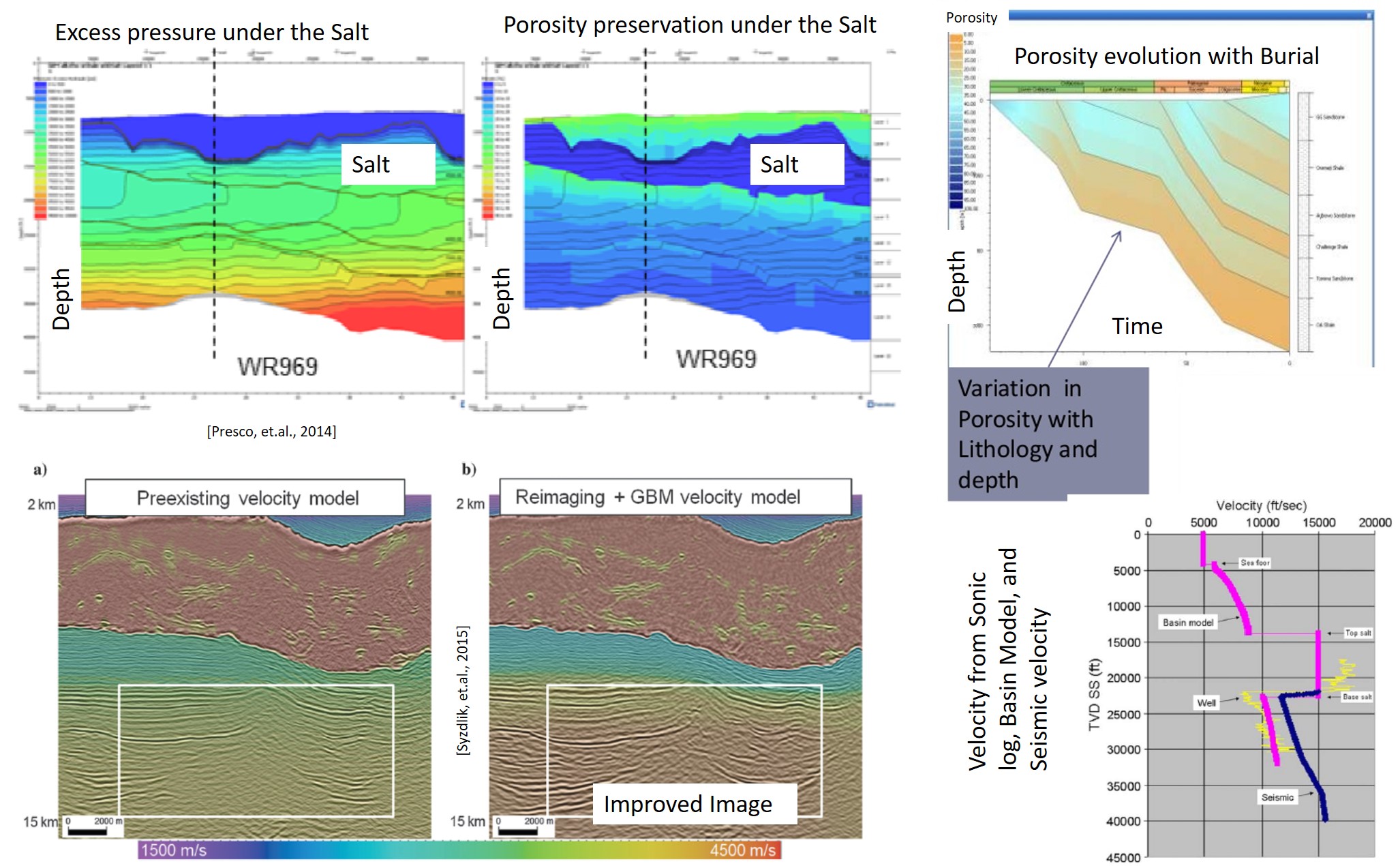 ​Osmosis and wettability alteration are perhaps the most important controls on fluid flow and transport in fine grained ultra-tight porous media. Understanding the flow and transport phenomenon in ultra-tight porous media over multiple scales is a growing discipline and requires diversity of scientific expertise to build a comprehensive theoretical consensus. Challenges are: how do these osmotic potentials couple with hydrodynamic flow from short (10^1 yr) to geological time-scales (10^6 yr)? in naturally or human perturbed systems to near-equilibrium systems, respectively. 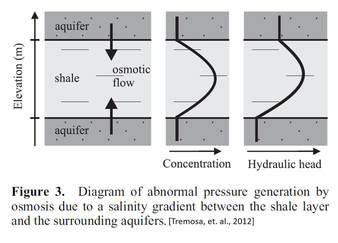